The Ultimate Guide to Breast Health

Welcome to Violet Daily’s A to Z guide to women’s breast health!

Read on for all the crucial information you need about PMS breast pain, supplements for breast health, why iodine is the best treatment for breast pain, and of course, the answer to “why do my boobs hurt?”! 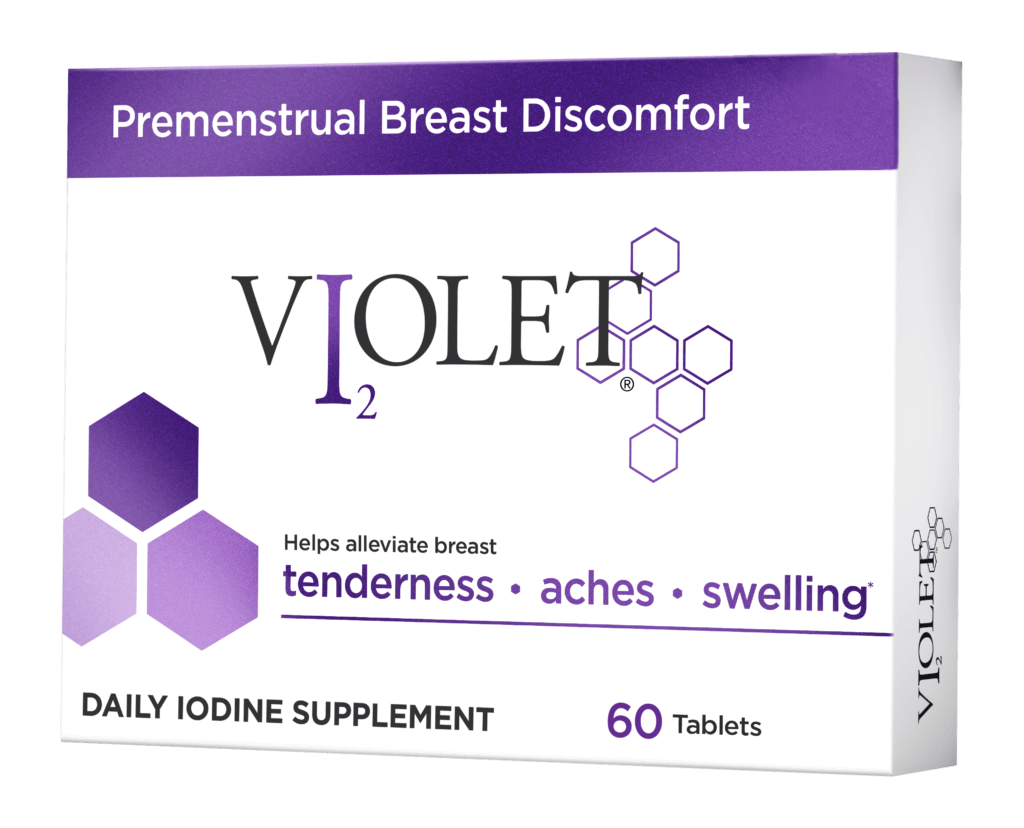 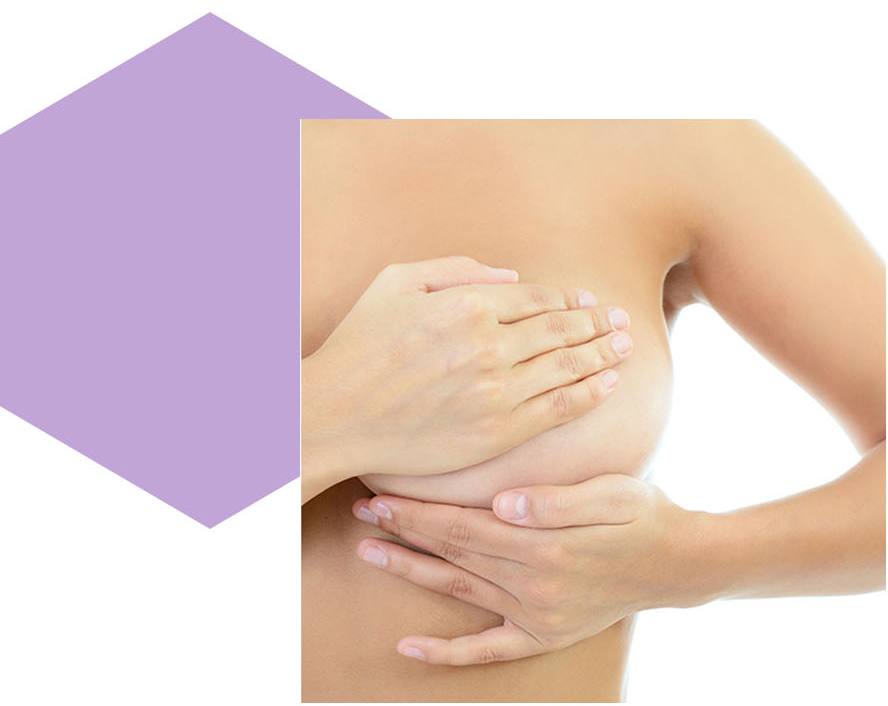 What are PMS BREASTS?

PMS Breasts are the feeling of tenderness, aches, swelling, and heaviness you feel before (and often during) your period. These are some symptoms of fibrocystic breasts, a condition many of us call “PMS breasts” because it coincides with other menstrual-related discomforts. Luckily, there are simple treatment options available. Specifically, there are formulated "PMS breast" supplements known to help.

Menstrual-related breast discomfort symptoms vary from woman to woman and month to month, but there are some telltale symptoms that most women can relate to, including:

Fortunately, there is finally a solution to help alleviate monthly breast discomfort.*

Menstrual-related breast discomfort is a reality for half of all women ages 15-49.

The condition affects millions of women every month – a cycle of breast tenderness, aches, swelling, heaviness, and, for many, even acute pain caused by high levels of estrogen and prolactin. While it’s best known for its role in the production of milk, prolactin also causes breast cells to build up month after month with each menstrual cycle. This buildup results in swollen breast tissue, which can develop into lumps and masses that put pressure on surrounding nerves, leading to breast discomfort that can last anywhere from several days to a few weeks each month. This discomfort may interfere significantly with intimacy, clothing selection, exercise, and even routine social activities.*

Healthcare professionals will typically first physically examine the breasts for lumps and irregularities. A sample of breast tissue may be needed to obtain an accurate diagnosis, but mammograms or breast ultrasound exams can also pick up the signs of fibrocystic breast condition. Lymph nodes (in the armpit) may be affected in some women as the lymph nodes form part of the breast tissue.

Previously, healthcare professionals have not been able to prescribe their patients an effective remedy to address breast discomfort without side effects. Natural remedies such as limiting caffeine and supplementing with vitamin E have not been demonstrated to work. However, now scientists have confirmed that molecular iodine is a form of iodine that has been demonstrated to reduce premenstrual breast discomfort symptoms associated with fibrocystic breast condition. This molecular iodine can be formulated into breast health supplements to treat a variety of breast conditions.

Breast discomfort is a common complaint among women of reproductive age and can have many different causes.

Many times, it is the result of puberty, menstruation, pregnancy, or menopause, but in rare instances could be due to something more serious. Benign breast conditions include both cyclic mastalgia and fibrocystic breast condition (FBC). 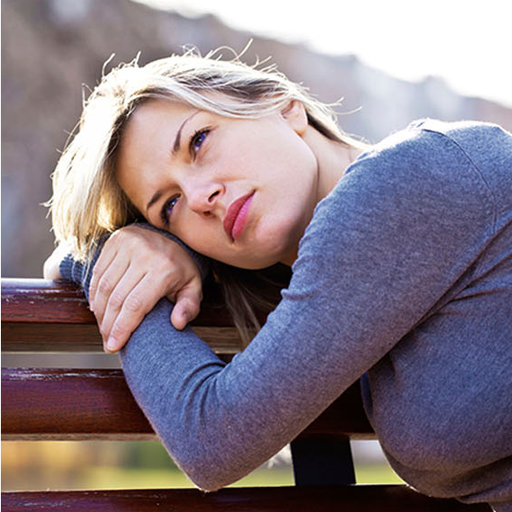 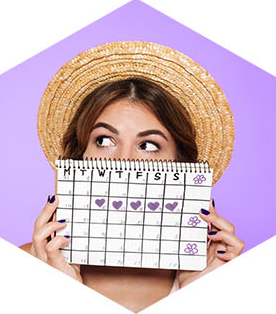 In cyclic mastalgia pain increases during the menstrual cycle. Women often notice symptoms every month in the days or weeks leading up to, and sometimes through, their periods and experience relief only after their period begins. The discomfort may be in one or both breasts and may range in severity from woman to woman and month to month.

The cause of FBC has been linked to the imbalance of hormone levels such as progesterone, estrogen, and prolactin. This imbalance causes cell growth in the breast tissue to exceed natural cell turnover (apoptosis) and becomes more severe with time. The condition tends to start to diminish at menopause. Typical symptoms can include light to severe swelling, aches, tenderness, and heaviness and can be felt anywhere from the breast to the underarm area. Fibrocystic breast condition (FBC) is also characterized by fluid-filled cysts that may become more tender throughout the menstrual cycle. Commonly felt during a breast self-exam, these lumps have a bumpy (cobblestone) or rope-like texture. 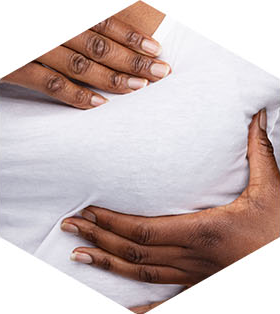 Breast pain can be noncyclic, meaning it is not affected by hormones and could be something more serious. If you experience any of the following symptoms, you should contact a physician:

Interested in learning more about how molecular iodine breast supplements can help alleviate menstrual-related breast discomfort? Keep reading for a solution to your monthly discomfort.

Healthy Breasts: Every Day, Every Way

Breast health is essential for all women, regardless of age.

The first step in promoting good breast health is knowing your normal.

Breasts come in all shapes and sizes and can change in many ways throughout your lifetime – through puberty, pregnancy, breastfeeding, menopause, and aging.  But even from month to month, your breasts may feel different due to your menstrual cycle.  The more aware you become of your breasts’ unique and changing characteristics, the easier it will be for you to pick up on something that needs to be examined.

Breast health isn’t something you should just think about during your annual checkup – instead, make sure your breasts get the attention they deserve every day. Proactively taking care of them is easy and should be part of your overall health regimen. Adding supplements for breast health into your daily routine is a simple and effective solution.

Here are some simple things you can do to promote breast health. (Your girls will thank you!)

The right bra matters
Having a properly fitting bra is critical to overall breast health. If your bra is not properly fitted to your personal needs, it has a direct impact on lymphatic drainage and cellular breast tissue health. Seek the help of a bra expert to measure you, especially if you have recently gained or lost weight, had a baby, or have been breastfeeding. Selecting a bra without underwire support allows for less pressure on the breasts and assists in not interfering with the lymphatic system around the breast tissue.
Don’t smoke
Smoking has been linked to a variety of chronic health problems. Women who smoke have a 30% higher risk of breast cancer than women who never smoked.
Give yourself a massage
Breasts benefit from proper circulation and what is called “tissue mobilization” for optimum health – a regular self-massage can increase circulation and help break up fibrous tissue. Try 50-100 light circular motions in each direction over the breast tissue and gently rub over the entire breast and underarm area to circulate the lymph glands and restore the flow of energy.
Breastfeed
Breastfeeding has been shown to have numerous long-term benefits for mothers including optimizing metabolic function, less risk of osteoporosis, and less risk of reproductive cancers.
Perform routine breast self-exams (BSE)
Self-examination takes just a few minutes and can be a critical step in maintaining breast health. The best time to perform a BSE is after your period when swelling and tenderness are at a minimum.
Get screened
If you’re over 40, make sure to schedule mammograms annually. While most breast changes are benign, you should call your doctor if you notice nipple discharge, rashes, lumps, thickening of the skin, changes in size or shape of your breasts, inversion of the nipple, or pain in the breast or armpit areas. If you have breast tenderness, swelling, aches, and heaviness during your menstrual cycle, you might have fibrocystic breast condition (FBC) — a very common condition that affects approximately 50% of women during their childbearing years. While you may have always accepted this discomfort as normal, it no longer has to interfere with your daily activities. 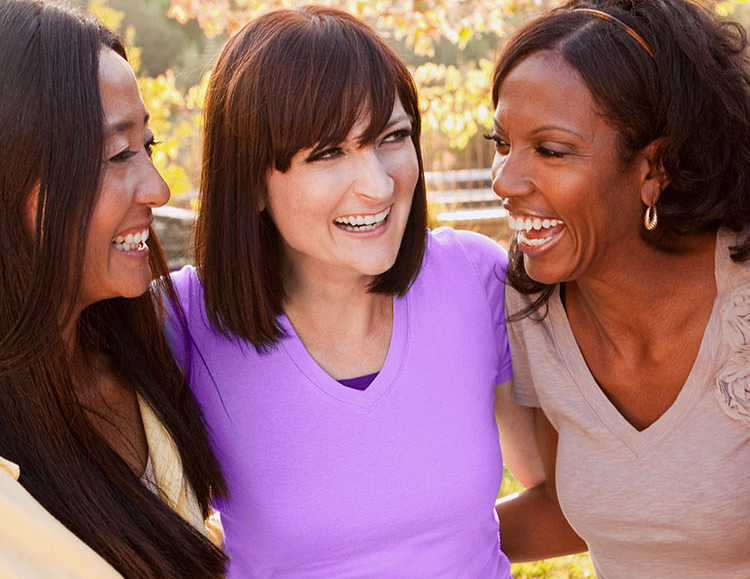 “Molecular iodine can help women improve their own breast health.”

The Science Behind Violet Iodine

Vitamins for breast health: A revolution in women’s wellness.

Introducing a daily regimen of the best iodine supplement that alleviates the symptoms you experience with your monthly cycle – like breast tenderness, aches, heaviness, and swelling*. Violet iodine for breast pain doesn’t just mask the discomfort temporarily; it actually promotes better breast health*. When you take a simple breast supplement every day, the result is true relief and reassurance that you’re proactively taking care of your breasts

The Role of Iodine in the Body (…and the Breast) Iodine’s primary role in the body is in the creation of the thyroid hormones, T3 and T4. The thyroid absorbs iodine to make and release these hormones into the blood. In addition to supporting proper thyroid function, iodine has other important effects, including the maintenance of healthy breasts. Iodine-deficient breast tissue is an underlying cause of fibrocystic breast condition. Multiple studies show that iodine supplementation reduces symptoms of this condition.
There are two primary forms of iodine for human consumption: iodide (I-) and molecular iodine (I2). In chemistry, iodine is an unstable element, which means that it reacts with its surrounding environment and loses its useful properties during oxidization (reacting with oxygen). For this reason, scientists combine potassium with iodide to form potassium iodide (KI), a stable form of iodine, which the body can then use. The thyroid more readily absorbs I- over I2, which can lead to a change in delicate hormone levels in the thyroid. Iodine from I2 is absorbed into the thyroid at a lower rate than iodine from iodide and a higher rate into breast tissue making molecular iodine the preferred form for breast health. Thus, this is considered the best iodine for fibrocystic breasts. Indeed, following a series of uncontrolled clinical studies with different forms of iodine, Drs. Ghent, Eskin, Low, and Hill concluded: “These results indicate the superiority of molecular iodine over iodides when treating fibrocystic breast disease.” View Clinical Studies
In the developed world, iodine deficiency has increased more than fourfold over the past 40 years. In the United States alone, iodine intake dropped by 50% between 1971 and 2001. This is likely because over the last several decades the amount of iodine found in food has decreased significantly while many substances that inhibit iodine uptake have become mainstream.
How Much Iodine Do I Need? The US recommended dietary allowance (RDA) for iodine is 150-290 micrograms (mcg) for adults, while the Food and Nutrition Board of the Institute of Medicine has set the tolerable upper limit at 1,100 mcg. These guidelines may be inadequate to address certain health conditions because 60-80% of a person’s iodine intake is absorbed by non-thyroidal tissues, such as breast tissue. Daily iodine doses of 3,000-6,000 mcg have been used safely in studies of people with fibrocystic breast condition. Is Iodine Safe? Clinical studies have demonstrated the safety and efficacy of molecular iodine over multi-month and multi-year daily use. Excess iodine does not build up in the body the way other heavy metals do. Iodine is water soluble and excess iodine is flushed from the body.
How Does Molecular Iodine work? In women with fibrocystic breast condition, the relationship between cell growth and cell death is out of balance, which leads to excess breast tissue resulting in breast discomfort. Molecular iodine has been demonstrated to normalize this imbalance and consequently helps alleviate the associated symptoms of breast tenderness, swelling, heaviness, and aches while promoting breast health. Thus, iodine for breast pain is a simple and effective solution. Clinical studies have shown that a daily regimen of breast health supplements composed of molecular iodine can provide relief from cyclic breast discomfort associated with fibrocystic breast condition. Violet Daily conducted a clinical trial of molecular iodine including 1476 women. We demonstrated that up to 74% of women experienced an improvement in their breast discomfort.

A daily regimen of breast supplements for better health.

Staying healthy means finding a routine that works for you– exercise, eating right, getting enough sleep – and being consistent.

One Violet Daily supplement for breast health every day is a safe, simple addition to your routine that can make the difference in how you feel month after month. If your problem is monthly breast pain, then Violet Daily is the solution. 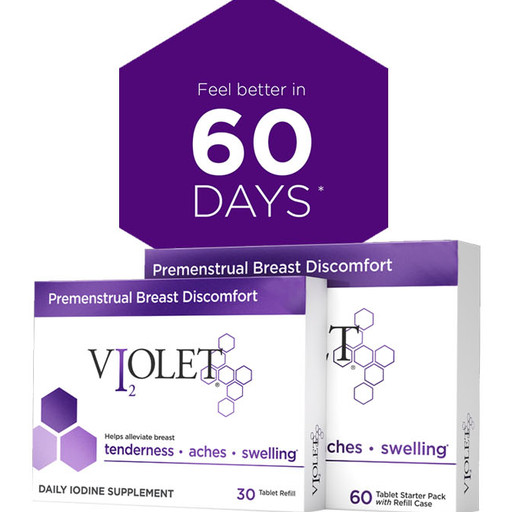 *These statements have not been evaluated by the Food and Drug Administration.

This product is not intended to diagnose, treat, cure or prevent any disease.